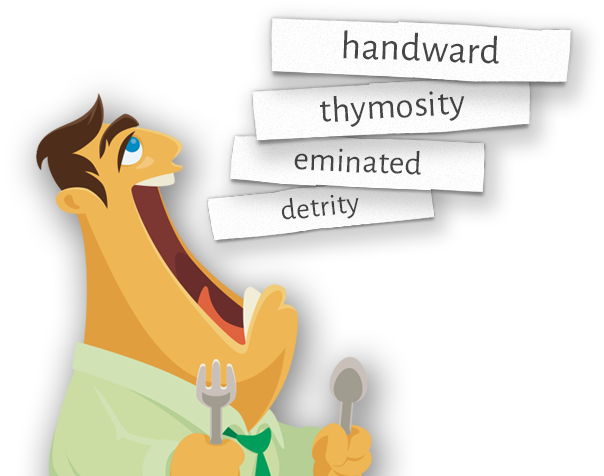 A word game like no other. You think you know English?
This game will show you otherwise.

An educated native English speaker knows about 35,000 words. Shakespeare knew about 67,000 words. If this seems like a lot, it’s not. It’s a tiny fraction of what the English language actually is.

How many words are there in English? Truth be told, nobody knows. Some dictionaries list hundreds of thousands, some say that there are millions. And then, new words are invented all the time. But no matter your background, proficiency, or education, there are hundreds of thousands of words you’ve never heard of, words you have no clue what they mean, words that don’t seem to belong to the English language. But they do.

To make things worse, for every obscure real English word, we made up dozens of fake ones. Your goal in this game is to pick the real words out of an ocean of fake ones.

You think it’s easy? Let’s try you. Dagnasty, govison, inauration, tralse. Which one of these is real? Yes, that’s right, none of them are real, all are fake. Except for the fact that we are pulling your leg: none of these words are fake, you can look up all of them in a dictionary. See?

Verbivore presents you with sets of four words: one real, three fakes. Your goal is to select the real word in each set of four. After you finish a round of twelve sets, you can learn what the words mean, and you can reveal the real words if you selected a fake one. Words are grouped in thematic categories, such as law, music, astronomy, or mathematics, and many others. We have more than 150 categories to push you over the limits of your English proficiency.

The game is current in the preview stage. In this version you have only 11 categories and only one play mode, with 30 levels of increasing difficulty. We will be releasing many more categories and play modes soon, so keep an eye for the updates. Good luck!

The word “Verbivore” is coined by Richard Lederer, an American author, speaker, and teacher, best known for his books on the English language and on word play such as puns, oxymorons, and anagrams. This game uses the title “Verbivore” with his permission. You can reach Richard Lederer at Verbivore.com.

How do I play?

The game presents you with series of four-word sets. In each set, three words are fake, and one is real. Your task is to select the real word. That’s all there is to it, really.

This is a tough question. Almost anything can be a real word. Approximately, 11 new words enter the English language every day. This means that a word that didn’t exist yesterday may exist tomorrow. However, a line has to be drawn somewhere, and we chose to draw it where Wiktionary draws it. If Wiktionary lists a word, it’s a real word. If it doesn’t, it’s a fake word.

The game rejected a real word

Yep, that can happen. Our words data is a snapshot of words known to Wiktionary at a given point in time. However, as grows the language, so does Wiktionary, and it may happen that we don’t know of a new-arrival word in English that Wiktionary knows about, and yes, it can happen that you were unlucky enough and got that particular word offered as a fake one. If this is the case, contact us and let us know. We’ll get it fixed, and you’ll get the bragging rights!

Where do fake words come from?

In short: we crate them. We use a very smart algorithm that creates linguirealistic (a word made up by our algorithm, whaddyaknow!) words based on the training data we feed to it. You could say it’s a kind of a machine learning thing.

What are levels and rounds?

In the basic game play (the only one currently available), you have 30 levels of increasing difficulty (level 1 being roughly on the outer limits of an average high-school student vocabulary, and level 30 being insanely difficult unless you are either an absolute genius or the exact opposite of it). Each level consists of 12 rounds.
In each round, you get 12 sets of four words, and you have 60 seconds to pick those 12 words you believe are real. For each round, you can pick the category, and all words in one round come from the same category.

How do I advance to the next level?

You need to collect enough stars. How many exactly that is, depends on the level. Early in the game it can be as low as 9 stars, and later it can be as high as 15. If you finish all the rounds and don’t collect the required number of stars, you can get an opportunity to advance to the next level even without collecting those stars. Just keep in mind, the next level won’t be any easier!

Why don’t you show the correct answer when I offer a wrong one?

Why is the game called “Preview”?

We wanted to push the game out and let you have fun sooner rather than later. There are a number of cool new features currently in development, not to mention more than a hundred of new categories guaranteed to tie your brains in knots and blow your socks off. If we figure out the game is interesting enough and that people are enjoying it, we’ll release the full version.

I hate the ads, why do I have to watch them?

We hate the ads too. And good news is – you don’t have to watch a single one. It’s entirely your choice, and you can play the game until kingdom come without having to watch a single ad. However, watching ads helps us make this game an even better and more fun for you, so by watching an occasional ad you sacrifice 10 seconds of your life to make this a better game. And that’s not all – for every add you watch, we give you something in return. Coins, correct answers, maybe a lot more in the future. Isn’t it a fair bargain?
And pssst! Don’t tell anyone, but when this game is out of its “Preview” stage, there will be a paid version that will never ever ever even offer an add to you – in it, everything will be for free.

How do categories work?

Deciding whether a word is difficult or simple is not an easy job. A fairly common name of a chemical may be too easy for a chemist, or an absolute unknown for a musician. That’s why the words are grouped into thematic categories. The “Preview” version comes with 11 categories, such as nouns, verbs, words from Latin, and some more thematic ones such as music and law. We have about 150 categories in preparation, with lots of fun with topics such as medicine, chemistry, mathematics, physics, astronomy, architecture, and similar. We also have some very fun categories such as hoods and ships (we won’t tell you just yet what these are!), or some very narrow ones such as plants, birds, fish, or butterflies.
In the “Preview” version all of the categories are always available to you, but in the full version you will be able to earn or buy more categories.
Before a round starts, you can choose the category to play in that round. The game chooses the category for you if you use the quick play mode from the home screen, but you can still change it if you click the category menu button during the countdown stage.

We use cookies to ensure that we give you the best experience on our website. If you continue to use this site we will assume that you are happy with it.OkNo
Revoke cookies